Use this link to get back to this page. 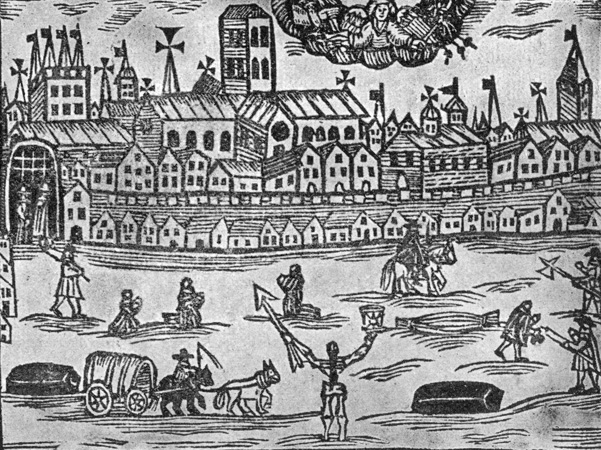 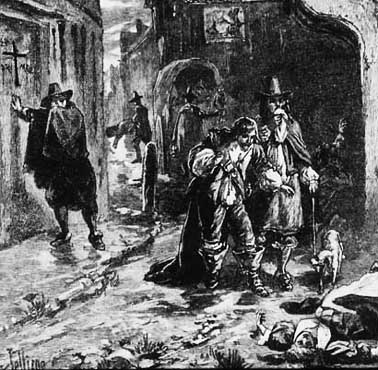 Plague is a bacterial disease that occurs in humans in main two forms, pneumonic plague and the more common bubonic plague. A third form, septicemic plague, is usually a complication of bubonic plague and occurs when the plague bacteria multiplies rapidly in the bloodstream. Bubonic plague is typically passed from rodents to other animals and humans via the bite of a flea. The flea acquires the bacterium that causes the disease as it lives on the skin of the rodent. Humans can also acquire the disease by direct contact with infected tissue. The bacterium is called Yersinia pestis, after one of its co-discoverers, Alexandre Yersin.

The disease is named because of the symptoms. The bacterial infection produces a painful swelling of the lymph nodes. These are called buboes. Often the first swelling is evident in the groin. During the Middle Ages, an huge epidemic of bubonic plague was referred to as the Black Death, because of the blackening of the skin due to the dried blood that accumulated under the skin's surface.

Plague has been a significant cause of misery and death throughout recorded history. The Black Death was only one of many epidemics of plague that extend back to the beginning of recorded history. Biblical descriptions of some disease outbreaks likely involved bubonic plague. The first recorded outbreak of bubonic plague was in AD 542–543. This plague destroyed the attempts of the Roman emperor of the day to re-establish a Roman empire in Europe. This is only one example of how plague has changed the course of history.

The plague of London in 1665 killed over 17,000 people (almost twenty percent of the city's population). This outbreak was quelled by a huge fire that destroyed most of the city.

The disease remains present to this day. In North America, the last large epidemic occurred in Los Angeles in 1925. With the advent of the antibiotic era, bubonic plague has been controlled in the developed world. However, sporadic cases (e.g., 10 to 15 cases each year) still occur in the western United States. In less developed countries where plague remains endemic (e.g., in Africa, Bolivia, Peru, Ecuador, Brazil) hundreds of cases are reported each year.

The African island nation of Madagascar, which normally reports sporadic cases of plague, experienced a rapidly expanding epidemic of plague in 2017. Both forms of the disease were observed in the outbreak, which affected areas of Madagascar where plague normally does not occur, including its major cities. The World Health Organization rushed over 1.2 million doses of antibiotics to Madagascar, and by the peak of the outbreak, more than 2000 people contracted plague and 125 died from the disease.

Such outbreaks of plague are unusual, but do not mean the disease disappears altogether. Rather, the disease normally exists in what is called an enzootic state. That is, a few individuals of a certain community (e.g., rodents) harbor the disease. Sometimes, however, environmental conditions cause the disease to spread through the carrier population, causing loss of life. As the rodent populations dies, the fleas that live on them need to find other food sources. This is when the interaction with humans and non-rodent animals can occur. Between outbreaks, Yersinia pestis infects rodents without causing much illness. Thus, the rodents become a reservoir of the infection.

Humans are not the “first choice” of host for Yersinia pestis. The Yersinia pestis bacterium infects the bloodstream of rats and other wild rodents such as squirrels and prairie dogs. An article published in February 2015 in Proceedings of the National Academy of Sciences called into doubt the long-held belief that black rats were the primary source of plague in medieval Europe and Asia. Based on analysis of historical climate conditions, researchers determined that Asian giant gerbils were the likely host for plague-infected fleas.

Humans become infected only through the bite of a flea that has ingested blood from an infected rodent. Another route of transmission is through person-to-person contact. If a person's lungs are infected with the bacteria, as in pneumonic plague, the disease can be transmitted easily to another person through a cough or a sneeze. This form of transmission is extremely quick: cases have been recorded of persons dying from the disease within 24 hours of exposure to an infected person.

Symptoms of infection in humans begin within days after contamination with the plague bacterium. The bacteria enter the bloodstream and travels to various organs (e.g., kidney, liver, spleen, lungs) as well as to the brain. In humans, plague can take two forms. One form, called the bubonic form, usually results from a flea bite and is characterized by a sore called a bubo. The bubo is actually the infected lymph node that drains the area through which the bacteria was introduced by the infected flea. The lymph node enlarges and turns black. Other symptoms of this form of plague include fever and congestion of the blood vessels of the eye. As the disease progresses, the bacteria spread to other parts of the body, resulting in septicemia, or widespread infection. The fatality rate of bubonic plague without treatment is about 50 percent.

If the infection is untreated, the death rate in humans with pneumonic plague approaches 100 percent. Prompt treatment of plague most often leads to recovery and a life-long immunity from further infection. Prevention is possible, since a vaccine is available. Unfortunately, the vaccine is protective for only a few months. Use of the vaccine is usually reserved for those who will be at high risk for acquiring the bacterial infection (e.g., soldiers, travelers to an outbreak region). Antibiotics are sometimes used as a precaution for those who might be exposed to the bacterium.

These modern-day treatment and preventative measures are a marked improvement from earlier times. In the fourteenth century, treatments included bathing in human urine, wearing feces, having a dead animal present in the home, and drinking concoctions of molten gold and crushed emeralds. As time progressed, even though the cause of the disease was still unknown, the preventative measures became more constructive. By the fifteenth century, for example, incoming ships were required to anchor offshore for 40 days before cargo or people could disembark. Quarantine is still practiced today as a protective measure for some diseases.

Another way to prevent plague is to control rodent and flea populations in cities. Fleas are easier to control than rodents, since most homes can be easily decontaminated. Many cities, especially in the United States, have instituted rodent-control programs aimed at decreasing the numbers of rodents that roam the streets.